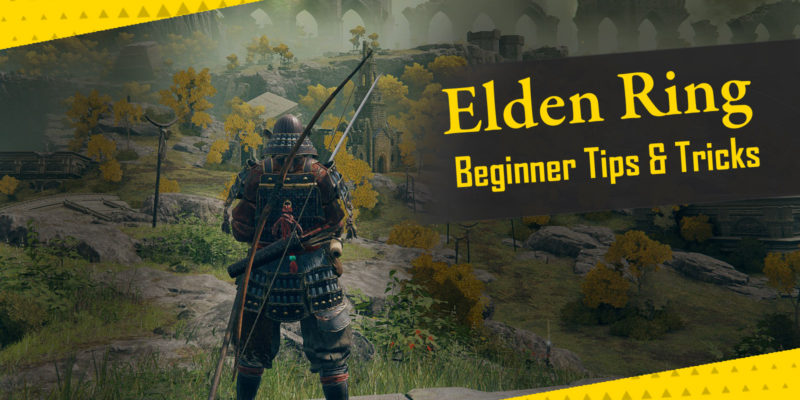 Elden Ring is an incredible game filled with lots of content to explore.

It’s easy to feel overwhelmed by everything in this game because there’s a huge map with lots of things to unlock and areas to discover.

If you’re new to souls games like me and looking for ways to play the game without dying every ten seconds, then these Elden Ring tips and tricks are for you.

These are some of the things that I learned while playing the game. While I only played the game for a few hours, I was able to learn so much about Elden Ring, mostly by making a lot of mistakes.

See if you can find any useful tips for your journeys in the game.

1. How To Progress In The Story

Elden Ring has no quest logs or quest markers to guide you where you need to go.

It’s up to you to explore this world and figure things out. And that’s part of what makes this game so great. But the game does have a main storyline and lots of other questlines. 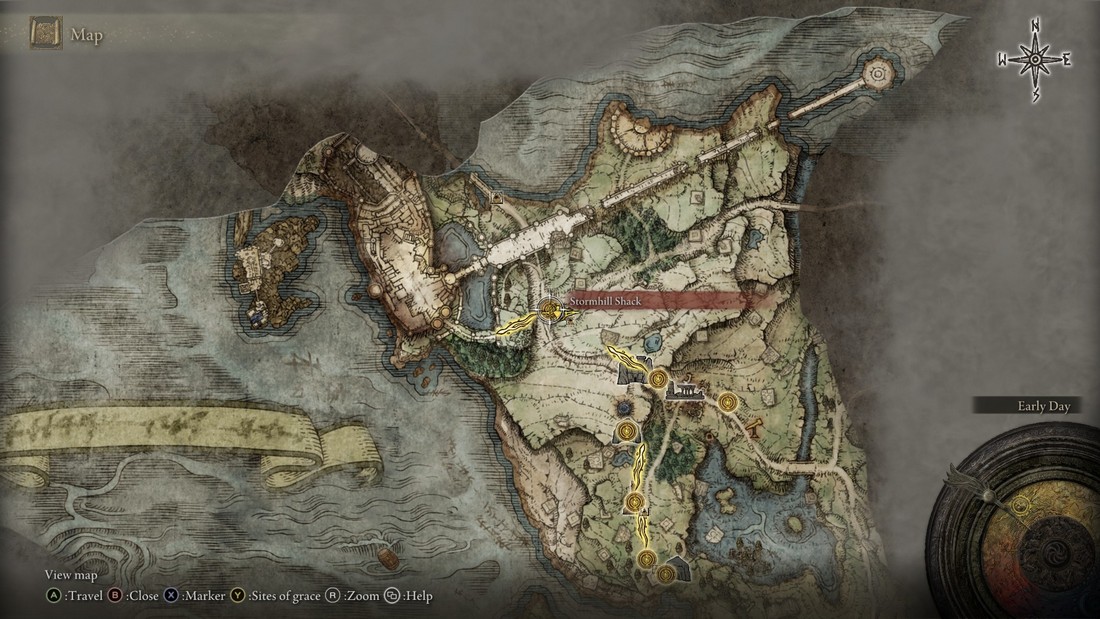 To explore the main questline, all you have to do is to follow the trailing lines on your map. These are called the Guidance of Grace. This shows the general direction that you need to go next.

Elden Ring is mainly a single-player game but it also has an online aspect to it where other players can leave messages and tips for you.

Unfortunately, 90% of these messages are from trolls who will ruin your gameplay experience. And I also found these messages to break the immersion of the game that I really enjoy in open-world games.

It’s just not worth it to have these messages all over the place on your path. Luckily, you can disable this by changing your settings to just play Offline.

This way, you won’t be able to play co-op but if you’re a solo player, you can use it to get rid of those annoying messages.

In my first playthrough (which I’m still playing) I chose to play as a Samurai. And I’m really enjoying this class so far.

I encourage you to try a melee class for your first playthrough just to get a true feel of this game. 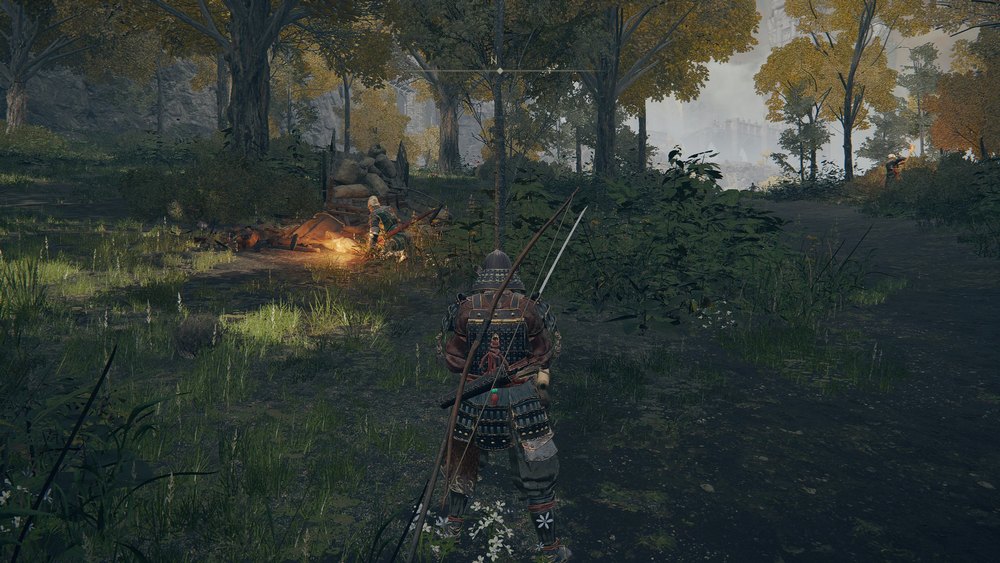 It feels incredible when you really take on an enemy with a sword and shield. It’s something that you won’t experience with a ranged mage class. And the Samurai has a cool two-hand attack that makes it totally worth it as well.

When creating a character, you will get to choose a Keepsake.

Golden Seeds are used to upgrade your Sacred Flask, which allows you to restore your health in battle.

This will come in handy in your battles against bosses.

As I’ve mentioned earlier, you can use Golden Seeds to upgrade your Sacred Flask.

Each time you upgrade your flask, you’ll be able to heal more times during battles. This is something you must do from very early in the game.

You can find Golden Seeds from those glowing trees you find alongside the roads.

You’ll need some form of transportation to get around the huge map in Elden Ring. 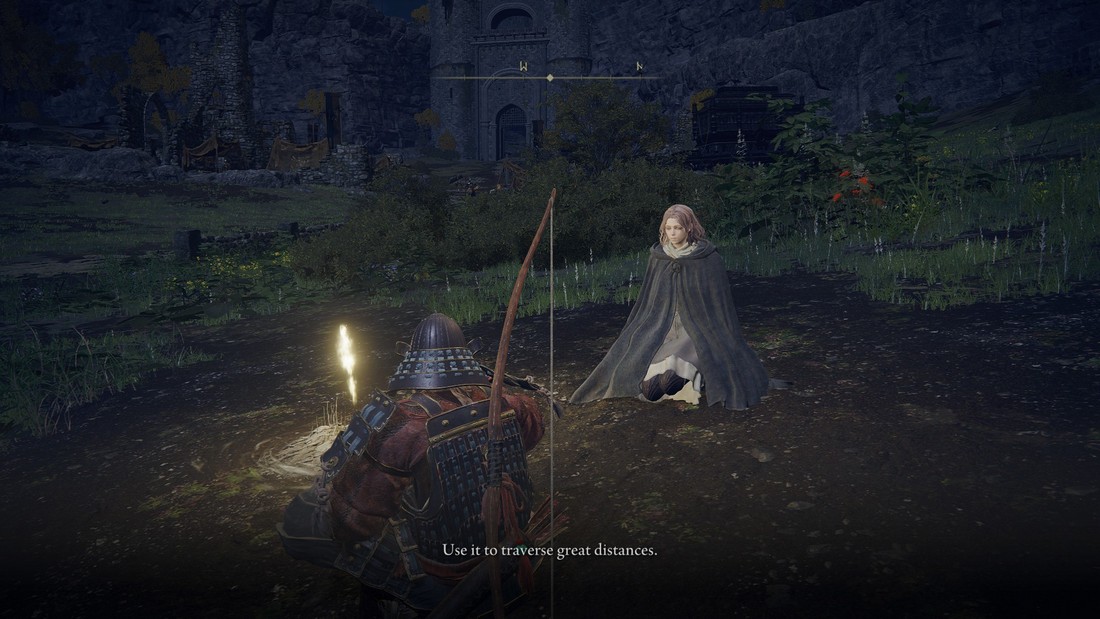 Make sure to unlock the horse, Torrent right after starting your game.

You can unlock the horse by resting at the Site of Grace at the Gatefront Ruins.

7. Get A Crafting Kit

You can craft some useful stuff in Elden Ring to make your playthrough much more comfortable. For example, if you’re using a bow, you can craft arrows very easily. 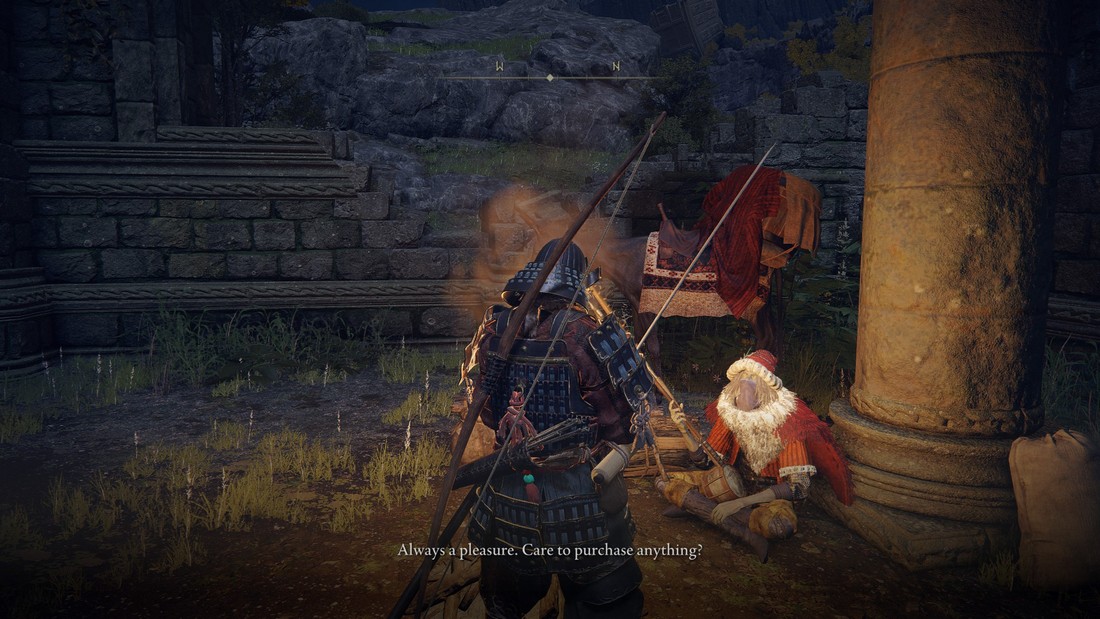 To be able to craft things, you first need to buy a Crafting Kit from the NPC vendor that you meet at the Church of Elleh.

It will cost around 500 Runes but it’s totally worth it. Grab it right away.

You should also buy a torch from the vendor at the Church of Elleh.

It will come in handy when exploring dark dungeons in the game.

If you try to take on the big bosses after just starting the game, you’ll be super frustrated. I know I did.

Instead, I leveled up my character.

I found a good grinding spot where I could take down a lot of enemies and kept using a Site of Grace to respawn the enemies. And killed them all to gather Runes and upgrade my character.

Try to get your character to around at least level 25 before venturing deep into the map.

This will help you survive just a little longer in your battles against tougher enemies.

Of course, leveling your character won’t do much damage to enemies if you don’t upgrade your weapons.

You can upgrade your weapons at the Smithing table at the Church of Elleh. Or at the Roundtable Hold, which you can unlock later in the game.

11. Where To Find Smithing Stones

Smithing Stones are the resource that you use to upgrade your weapons, at least to upgrade the first few levels. 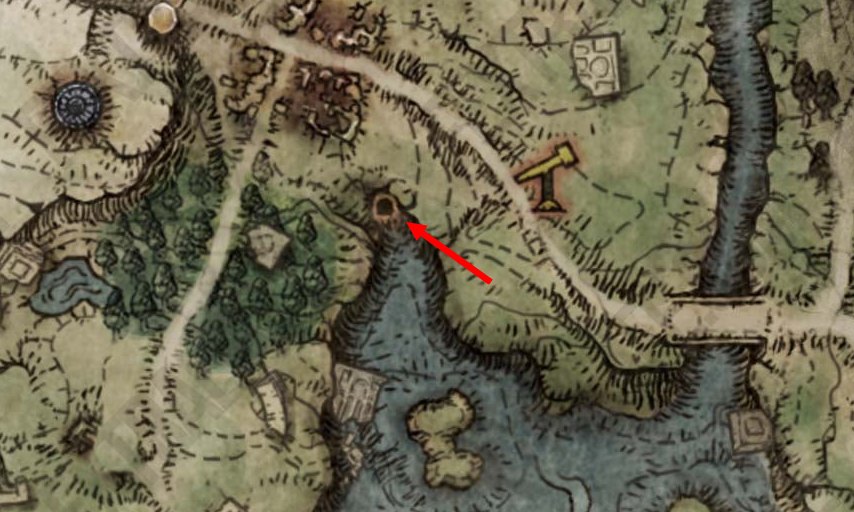 You can find these Smithing Stones in some caves. These caves are actually marked on the map with a weird hole-like marker.

Needless to say, Elden Ring bosses are tough. And unless you’re trying to test your patience or skills, you shouldn’t try to engage these bosses early on.

Try to level up and farm some good gear before you actually take on boss enemies.

13. Learn To Use Quick Slots 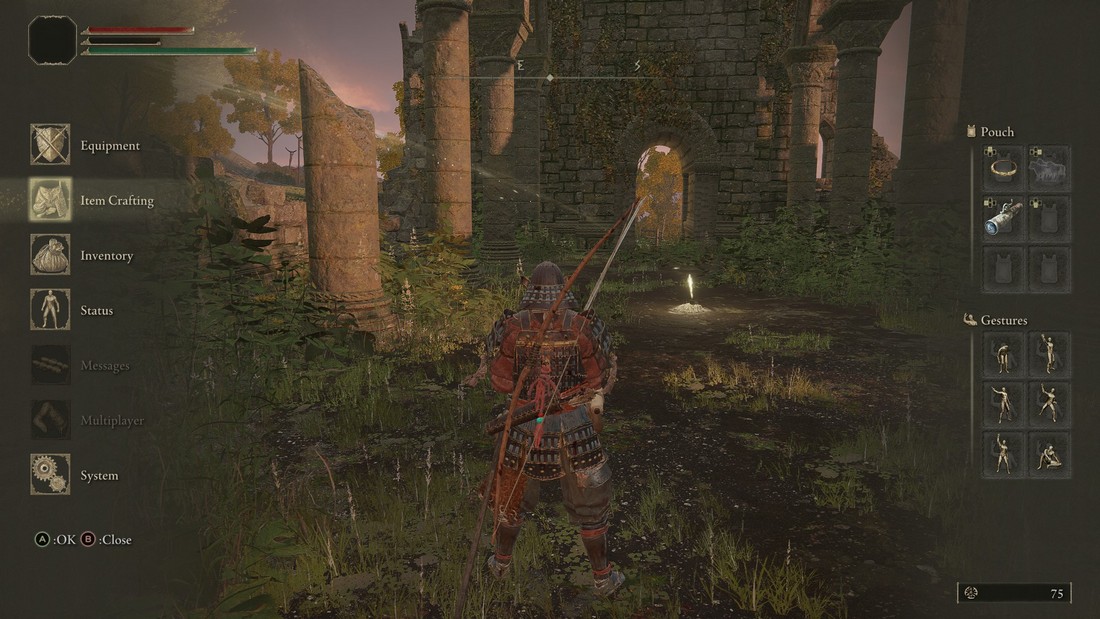 To add items to quick slots, open the menu and move over to the panel on the Right-side of the screen.

Be mindful of the weight of the equipment you’re wearing. This is displayed at the right side of the Equipment page.

Some armor and weapon are quite heavy. When using these your movement and dodging will be very slow.

15. Get The Jellyfish Spirit

The spirits are very useful during boss fights, especially to distract the enemies.

The Jellyfish Spirit is especially useful since it has a lot of health and can survive a while during boss fights. And you can unlock this spirit very early on in the game.

You can find this spirit by going straight up North from the Gatefront Ruins. Unlock the first Site of Grace you find after those wolves jump at you. And talk to the NPC in the shack near there.

16. Get The Flask of Wonderous Physick

This is a very useful item that you can consume to gain buffs. You can drink this potion once per session and it refills after resting at a Site of Grace. 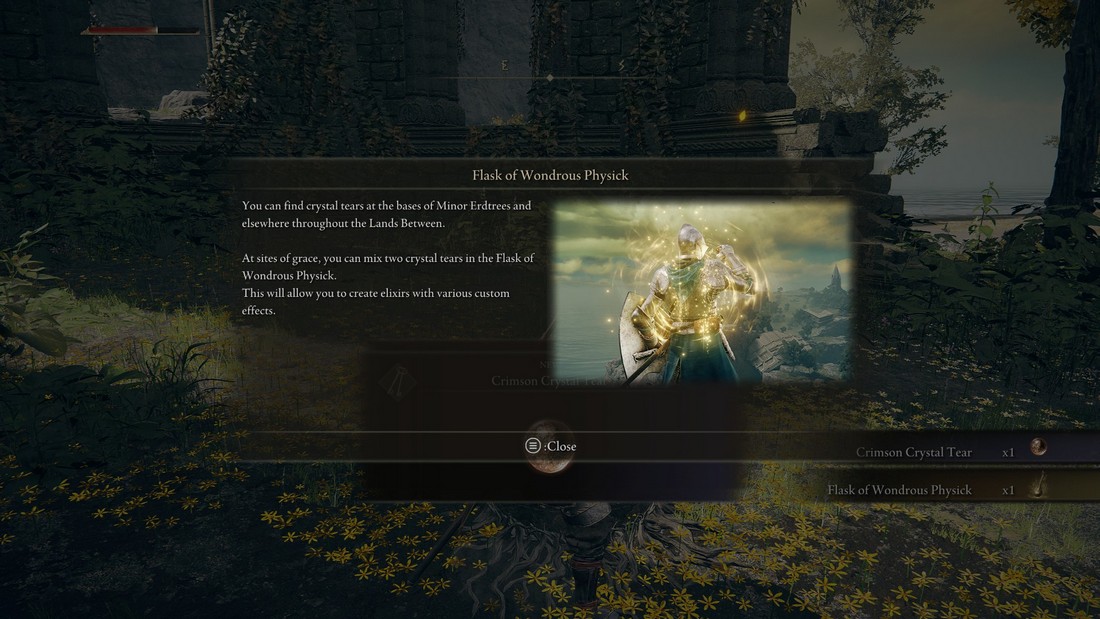 You can unlock this Flask at the Third Church or Marika. Just go down the road past the Gatefront Ruins and take the left after passing the bridge. And go all the way to the end of the road to find the Church of Marika. You’ll find all the items for the flask there.

Fia, is an NPC quest giver you’ll meet in the Roundtable Hall. She will ask to hug you but don’t do it. 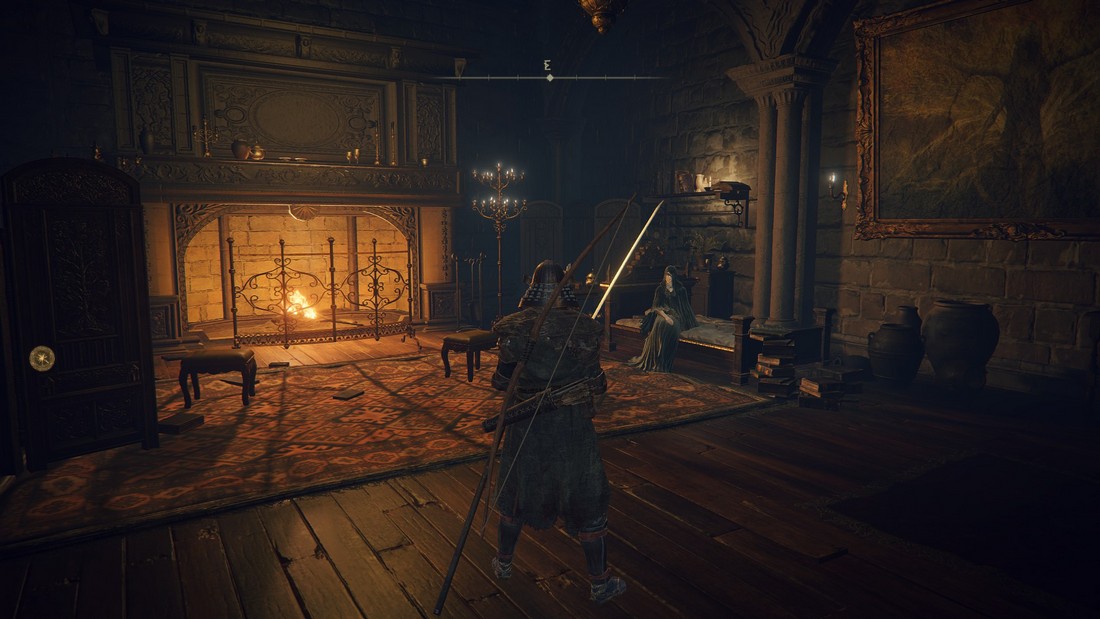 If you hug her, it will add a 5% health debuff that will stick around for a long time.

Fia also gives a questline. So if you want to complete this quest, you will have to hug her. The debuff will go away after completing the quest.

I strongly recommend that you follow a build guide for whatever class you’re playing to get the most out of this game.

Your chances of survival will be much higher if you follow a good build that focuses on the right stats and gear. 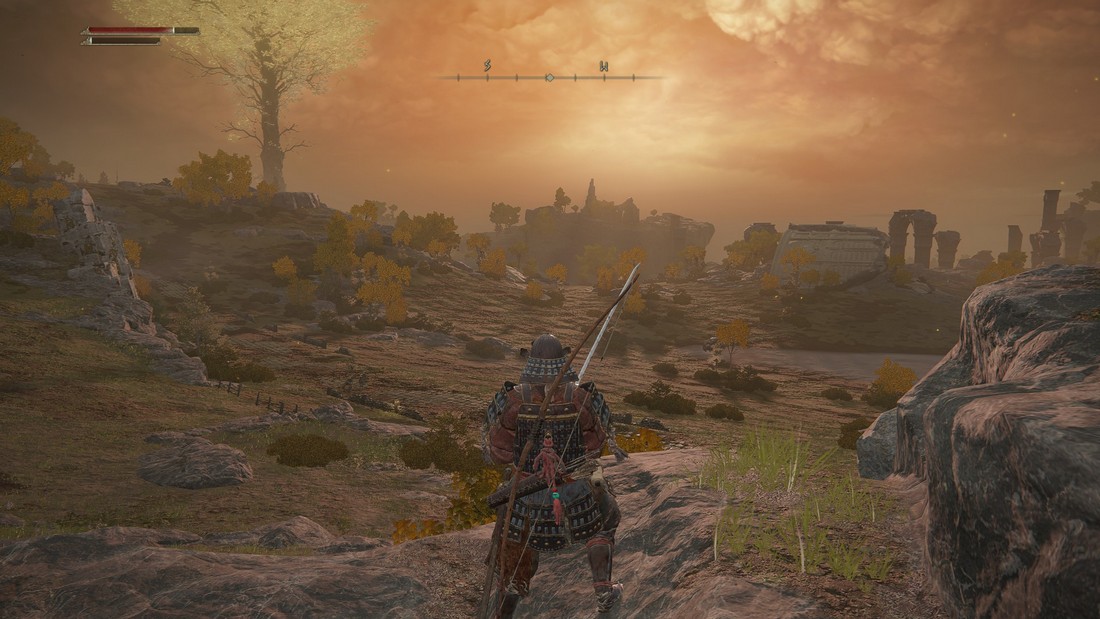 Elden Ring is designed to encourage the player to explore. You will find weird enemies, hidden areas, and lots of cool stuff when venturing beyond the path.

So feel free to explore this map on your own terms. Don’t try to finish the game as soon as possible, unless you’re doing a speed run.

You will die a lot in Elden Ring, a lot!

But that’s totally OK. It’s part of the game. When you die, learn from the mistakes, get better, and try again.

More importantly, you should learn to be patient. If a boss keeps killing you over and over, you’re obviously under-level. Go get level up.

And, if you feel stuck, don’t be ashamed to read guides or watch tutorials. 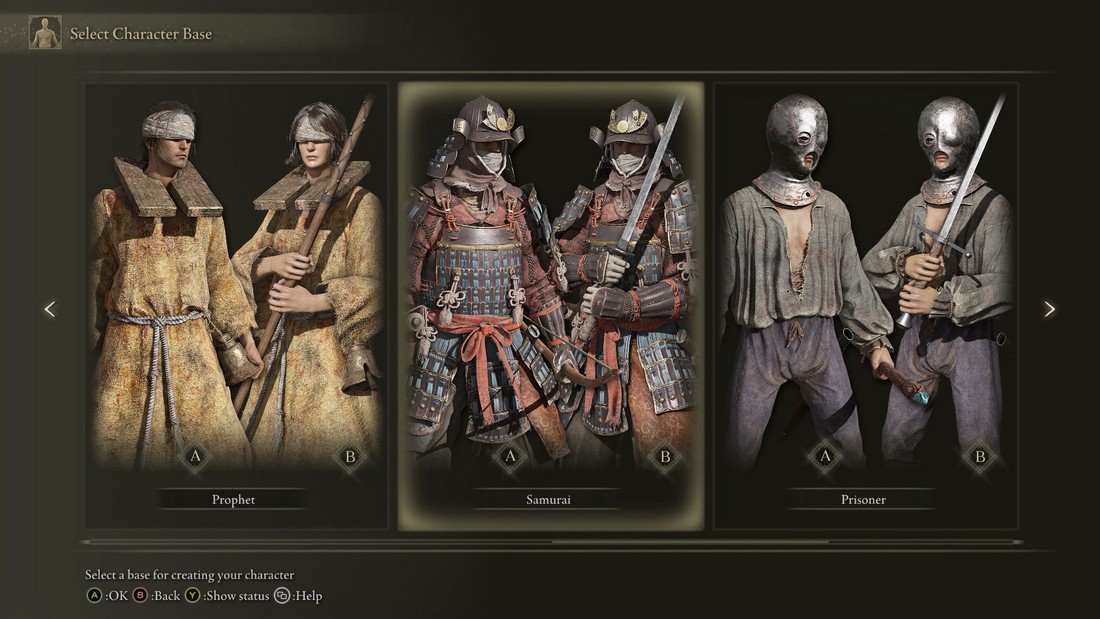 There are a lot of classes you can try in Elden Ring. If the class you’re playing right now feels boring, you can always start a new game with a different class.

If sword and shields aren’t your thing, you can try a ranged class. Or a mage build.

Even though Elden Ring is such a great game, its PC port is terribly optimized. You will constantly get FPS drops and lags.

After scouring the web and YouTube, I found a fix that improved the game performance. But it’s only for NVIDIA users. 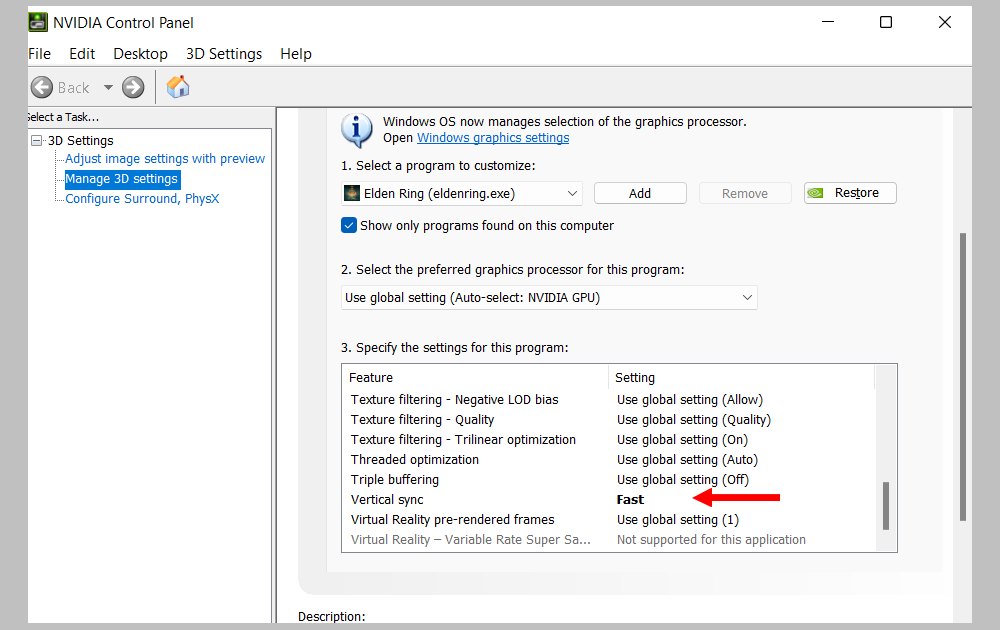 ELDEN RING: How To Get The Horse (Torrent)

Elite Dangerous features a 1:1 scale of our Milky Way galaxy. And that includes our ...
By GandalfTheGamer
2 hours ago