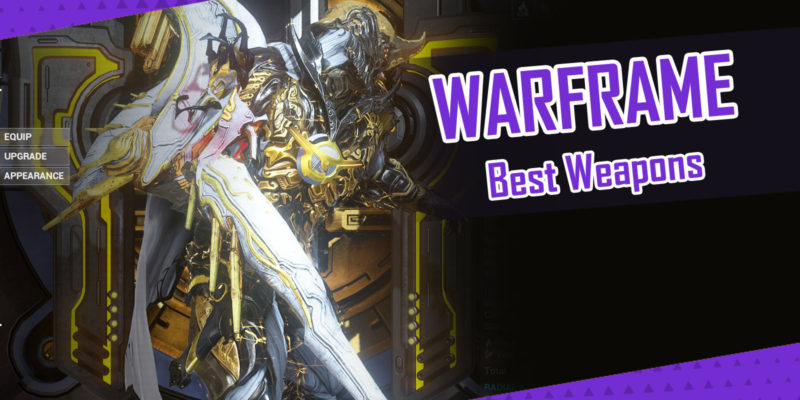 Warframe offers a massive collection of weapons for players to choose from.

There are over 600 weapons in the game, including 157 primary weapons, 124 secondary weapons, and 180 melee weapons.

Sadly, most of these weapons are terrible and only good for leveling up mastery rank.

If you’re just getting started in the game or going for a new playthrough, it can be a bit tough to find the right weapons since it involves a bit of a grind to build each weapon in the first place.

So here are my top picks. These are the best weapons in Warframe that you should build first.

I made sections to showcase the best weapons for primary, secondary, and melee classes. I also included Mastery Rank (MR) requirement to build each weapon. Have a look.

If you’re more into sniper-style rifles or cover-based shooting, these picks may not be the perfect choice for you. 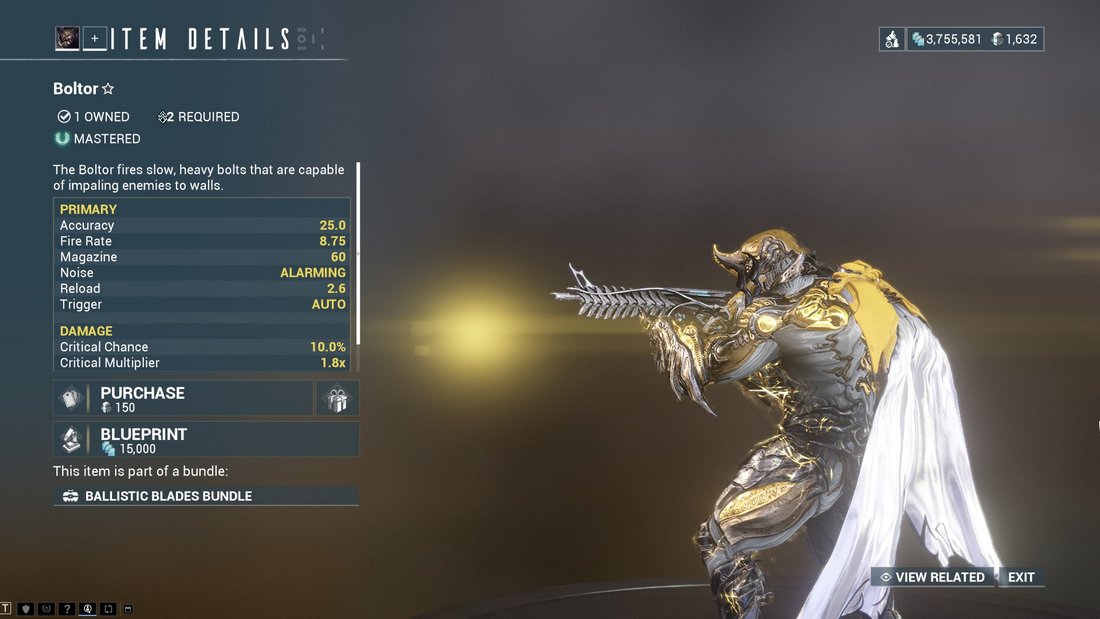 Boltor is one of the first weapons you can build in the game. And you should build it as soon as you hit Mastery Rank 2.

This weapon is one of my favorites and it can deal a ton of damage to almost every type of enemy in the game, at least in the early missions.

Boltor is an auto rifle with a sizeable magazine and an impressive fire rate. You can blast through enemy mobs like nothing with this weapon.

You could easily survive up to MR 5 or over with this rifle. 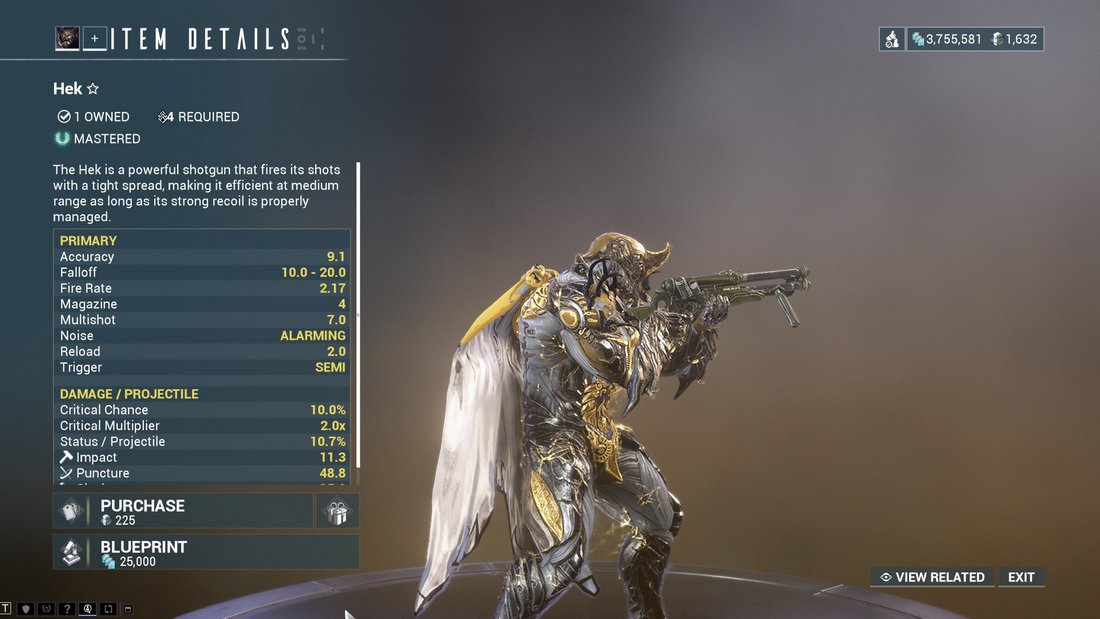 HEK is a powerful shotgun that you can build from MR4.

HEK has a very short magazine but this weapon packs quite a punch.

It can pretty much one-shot any low-level enemy and it’s the perfect weapon you can have when taking down big bosses. 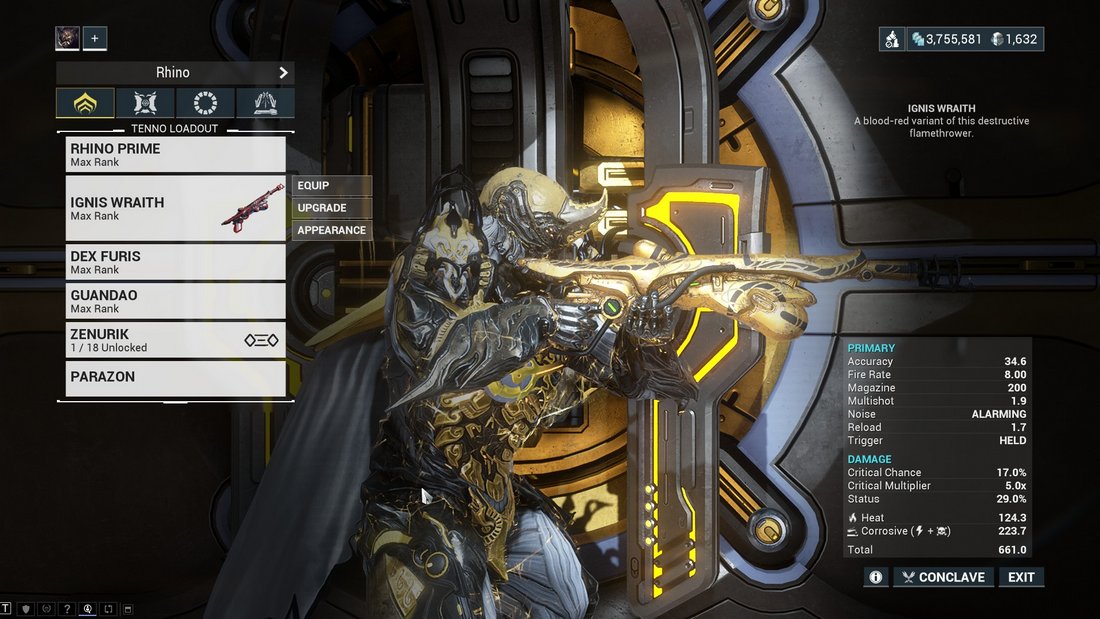 Ignis is a flamethrower-style weapon classified as a rifle. It has an insane AoE that can deal damage to groups of enemies at once.

This weapon is by far one of my favorite weapons in the game. I’ve used it throughout the game until I reached MR 12. It’s that powerful and effective.

You can find the blueprint for Ignis from your clan dojo. Look for the Ignis Wraith blueprint if you can. It’s a bit more powerful than the standard version. 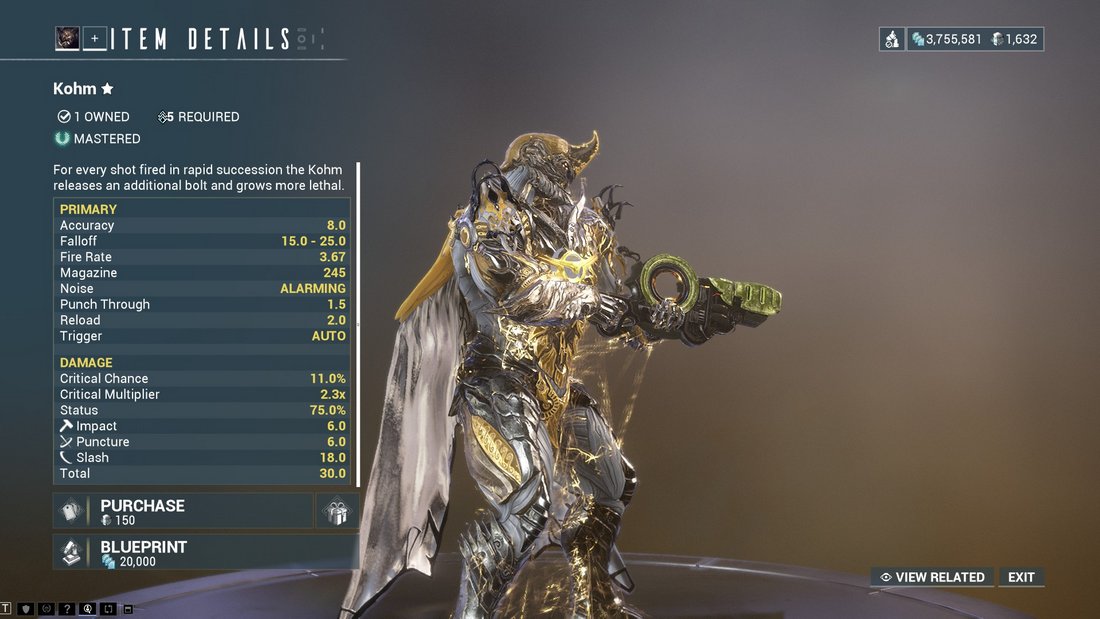 If you’re not a fan of Ignis gas damage, you can check out Kohm.

Kuva Kohm is a fan-favorite weapon in Warframe but to build that you need to be MR 13. Until then, you can stick with the standard version.

Kohm is categorized as a shotgun but it has an auto-rifle magazine with a fast fire rate. So it’s perfect for hunting mobs. 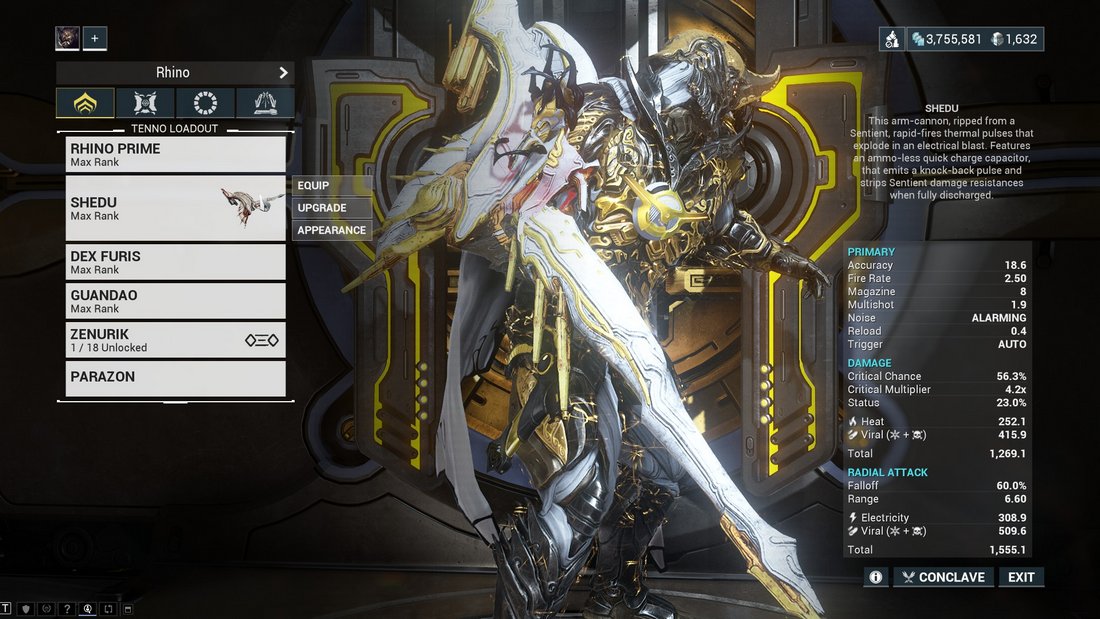 Shedu is a sentient arm cannon that has an unlimited ammo supply.

This weapon has a magazine that packs 7 shots but it can generate ammo for as long as you want.

Shedu is great for almost every type of mission and it’s been my go-to choice for everything from boss battles to survival missions.

Just be careful when firing it at close range as it has a strong stagger effect.

You can get the blueprint for Shedu by ranking up Cephalon Simaris standing. Or you can trade it with another player. 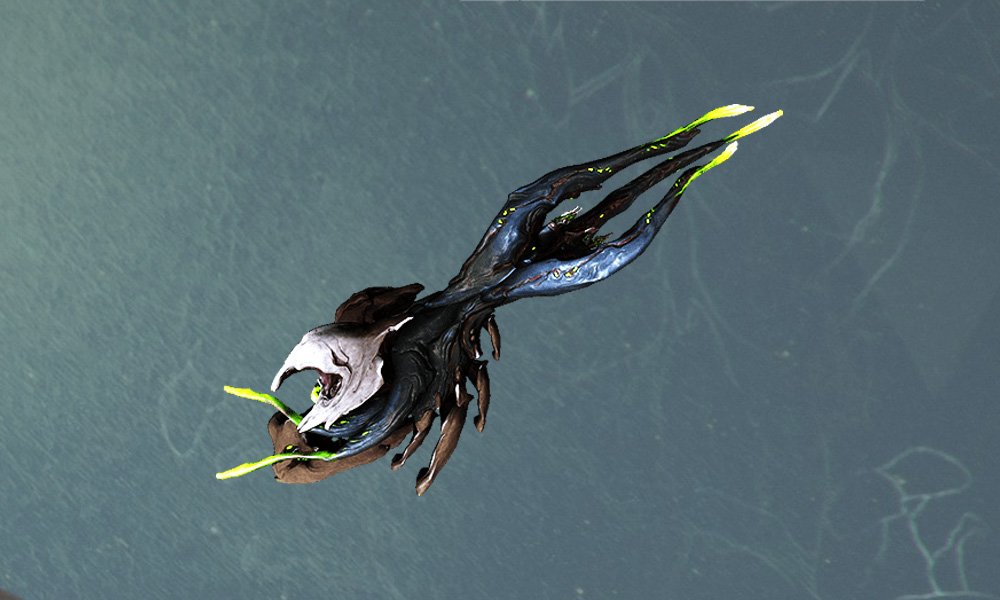 Bubonico is another arm-cannon weapon. This one works as an automatic shotgun that has an alternate firing mode with explosives.

It works similarly to Shedu and does not have an ammo reserve. Instead it automatically generates ammo.

The mix of slash and toxin damage done by this weapon makes it one of the best against grineer and infested.

Acquiring the blueprint for this weapon is also quite easy as it can be bought from your clan dojo.

I’m gonna be honest with you, I never really use my secondary weapon. I just use it as a fashion piece or to level mastery.

If you have to have the best secondary weapons in your build, try these weapons. 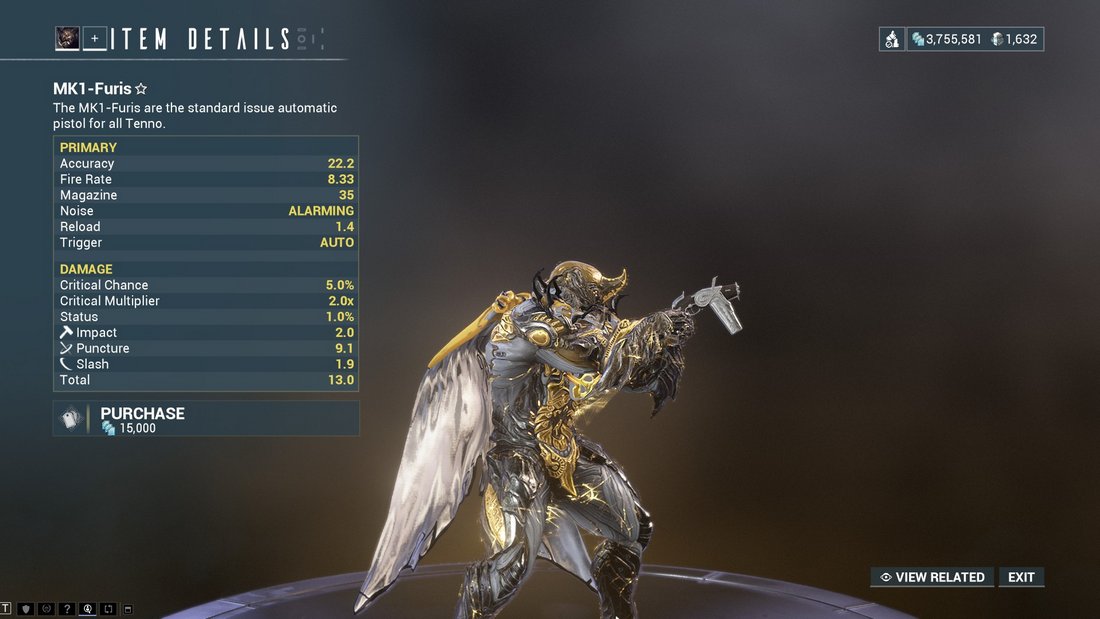 You can build MK1 Furis right off the bat at the start of your playthrough.

This weapon actually comes in handy during the early stages of the game.

Since it has a sizeable magazine with a fast fire rate, it’s great to use as a backup when you run out of ammo on your primary weapon. 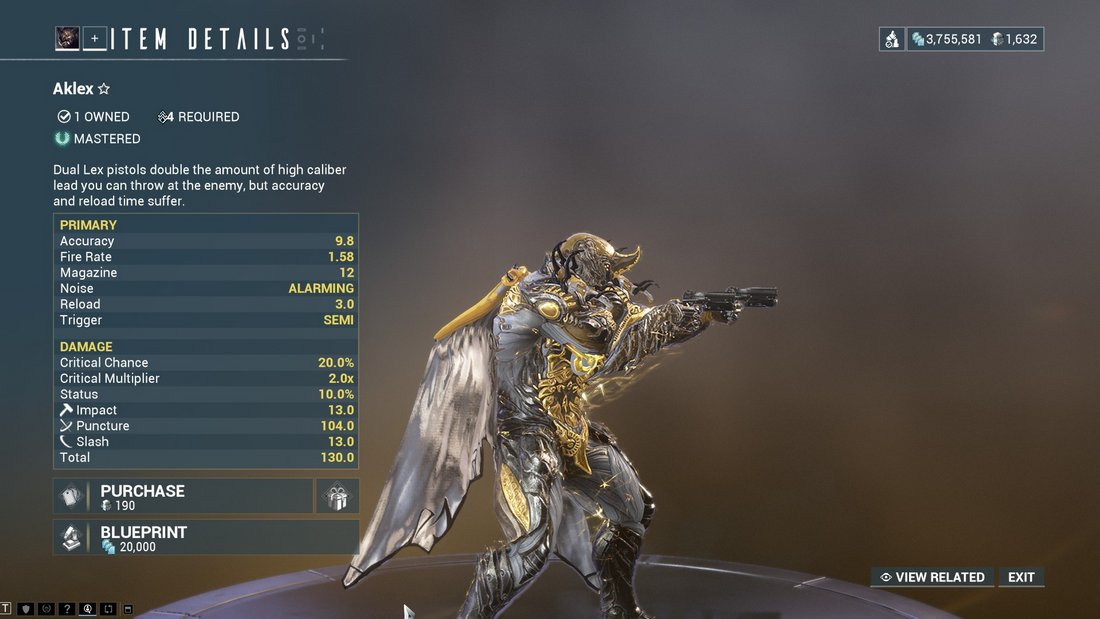 This weapon packs a punch with each of its shots.

Aklex works like a pair of powerful handguns. The only downside is it has very slow reload times. 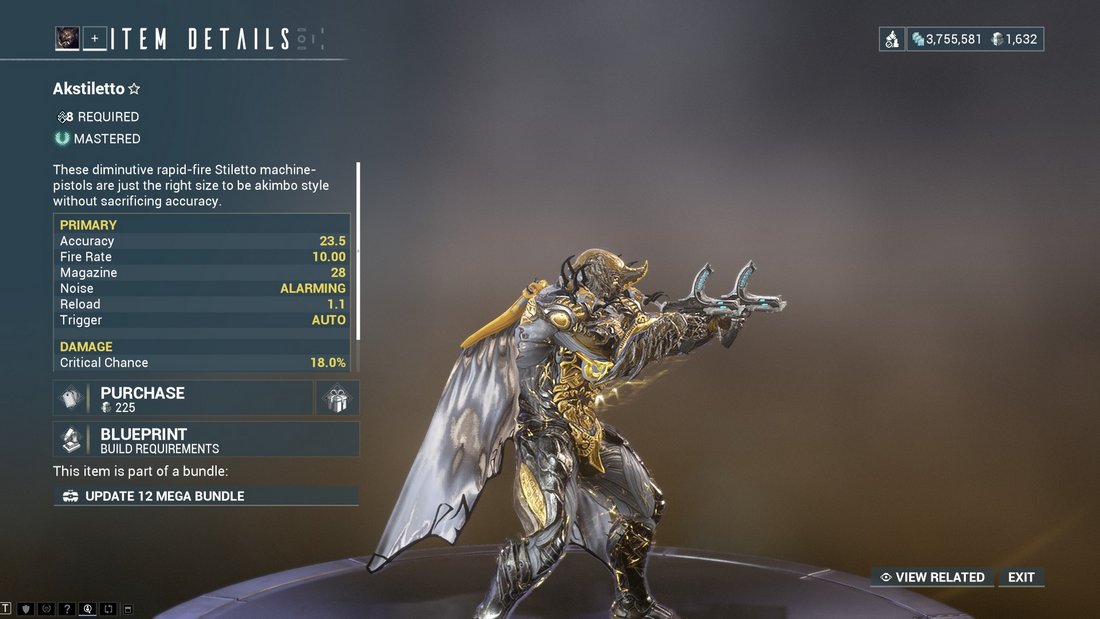 This weapon is also fun to use as it feels like using a pair of UZIs. 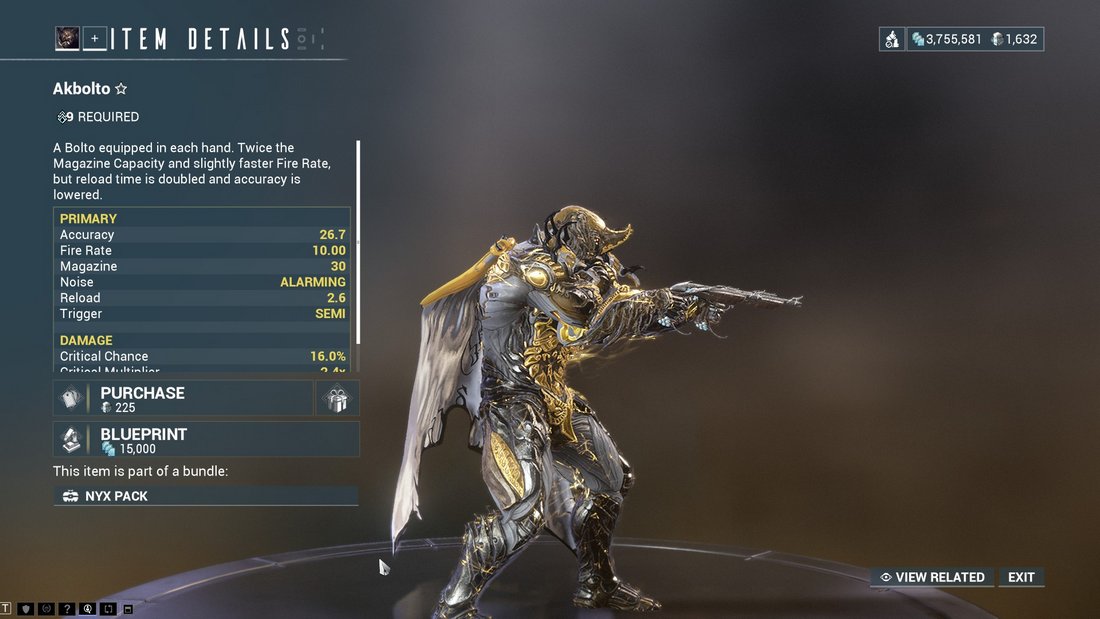 You can think of Akbolto as a pair of revolvers. They are slow to reload but have a huge magazine and deal tons of damage.

Akbolto is perfect for builds that use rifles and swords.

When choosing a melee weapon, I often look for weapons that have better reach and movement-based abilities. That’s why I love polearm weapons.

With polearm weapons, you can basically run rounds around enemies swinging the weapon around and dealing tons of damage. They are my go-to weapon for survival missions. 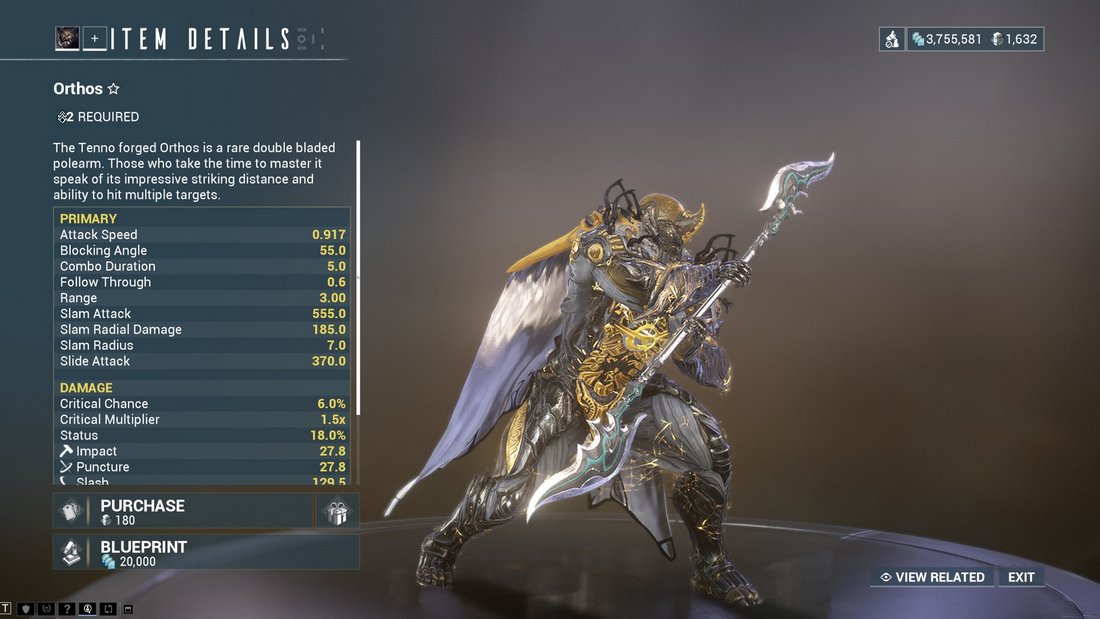 Orthos is the first polearm you should build. It’s fairly easier to build than other polearms and you can easily buy the blueprint from the market.

Don’t be excessive with modding this weapon. Use this until you reach MR 4 and then build Guandao. 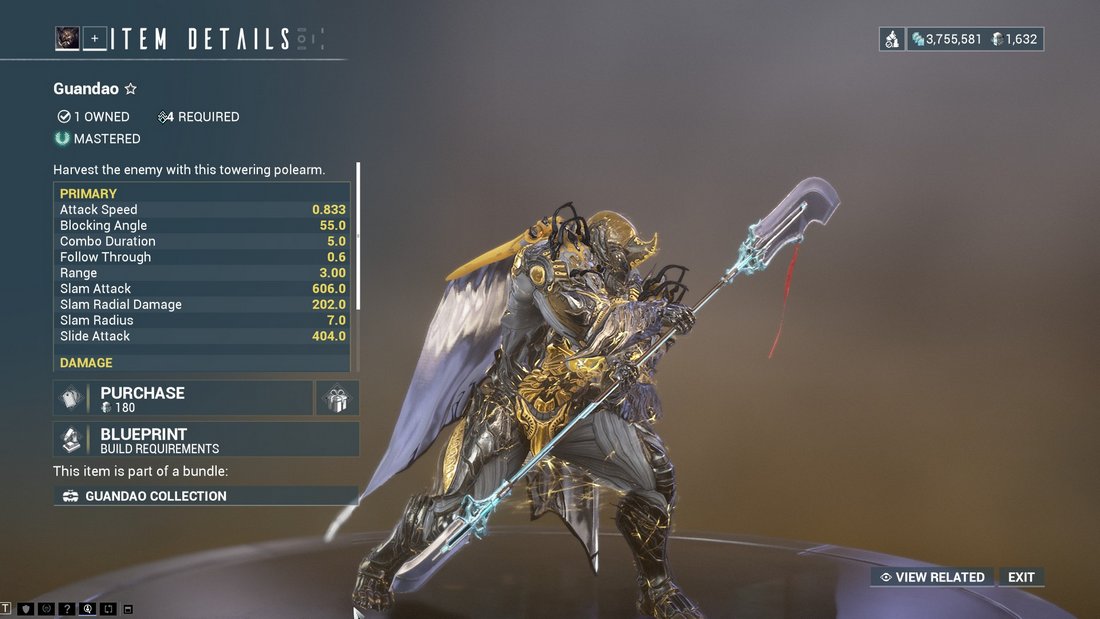 Guandao is my favorite polearm that has some amazing attack speed and deals critical damage.

The weapon is very easy to use and with the right mods, you can use this for any mission without even needing a primary weapon.

You can grab the blueprint for Guandao from your clan dojo.

The only reason I’m listing Xoris here is because of its cool throwing ability. It’s great for taking down enemies on hard-to-reach places.

Plus you get everything you need to build this from the The Deadlock Protocol mission for free.

Unfortunately, I deleted this weapon from my arsenal to make way for others so I don’t have an image to share of this weapon. 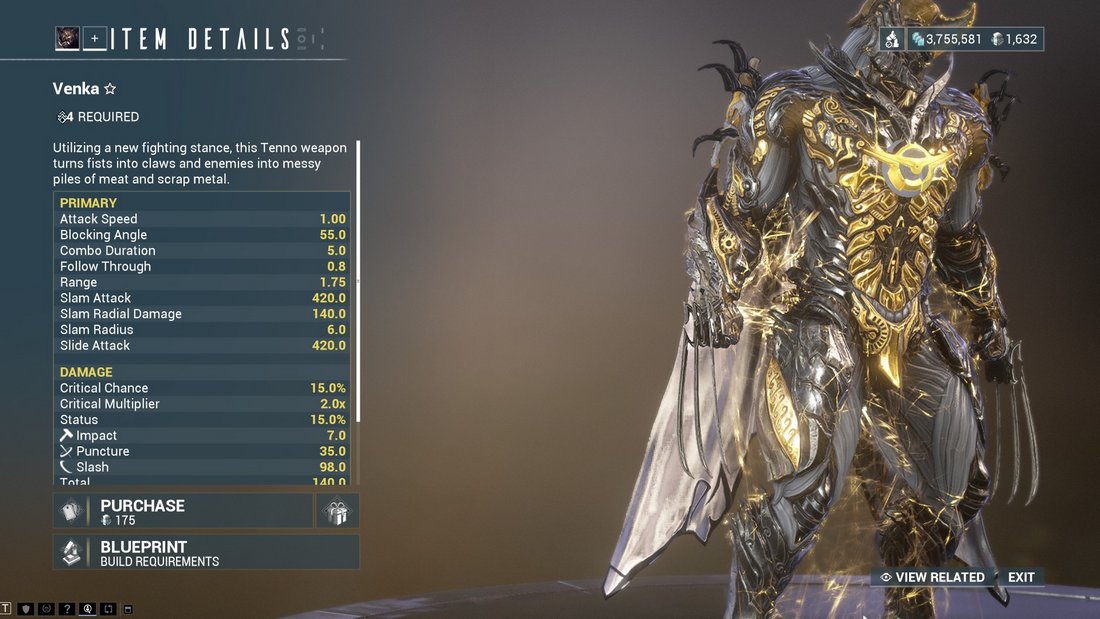 If you want to be like Wolverine in Warframe, this is the melee weapon for you.

Venka is a gauntlet-style weapon with retractable claws. These will surely make you feel like a badass in the game.

There are many great weapons in Warframe that I haven’t even gone around to building yet. But for this list, I wanted to stick to basics and offer suggestions for new players to get a head start in the game.

I’m sure there are better choices but for a beginner’s experience, these weapons will help you survive and play the game more comfortably.