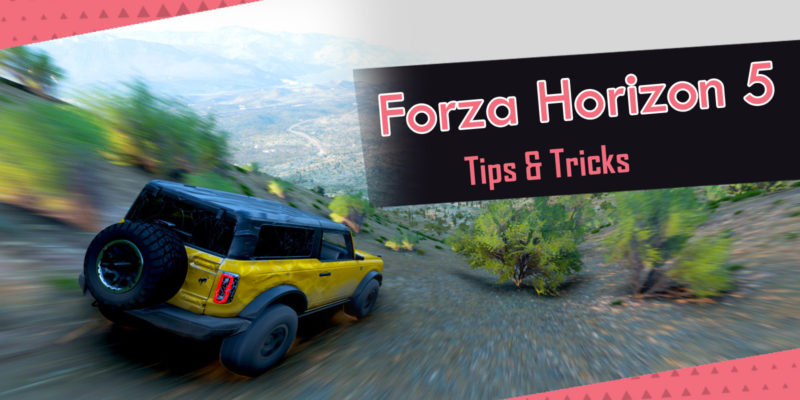 Even though Forza Horizon 5 is an arcade racing game, it actually feels a lot like an MMORPG.

There are lots of aspects and elements in this game that usually takes a while to fully understand as a beginner.

This was especially true for me since I was new to the franchise. I only played Forza 4 for a while before jumping into Forza Horizon 5. And there was a lot for me to learn.

In this guide, I share some of the things that I learned while playing Forza Horizon 5. I hope these tips will be helpful to other riders out there. 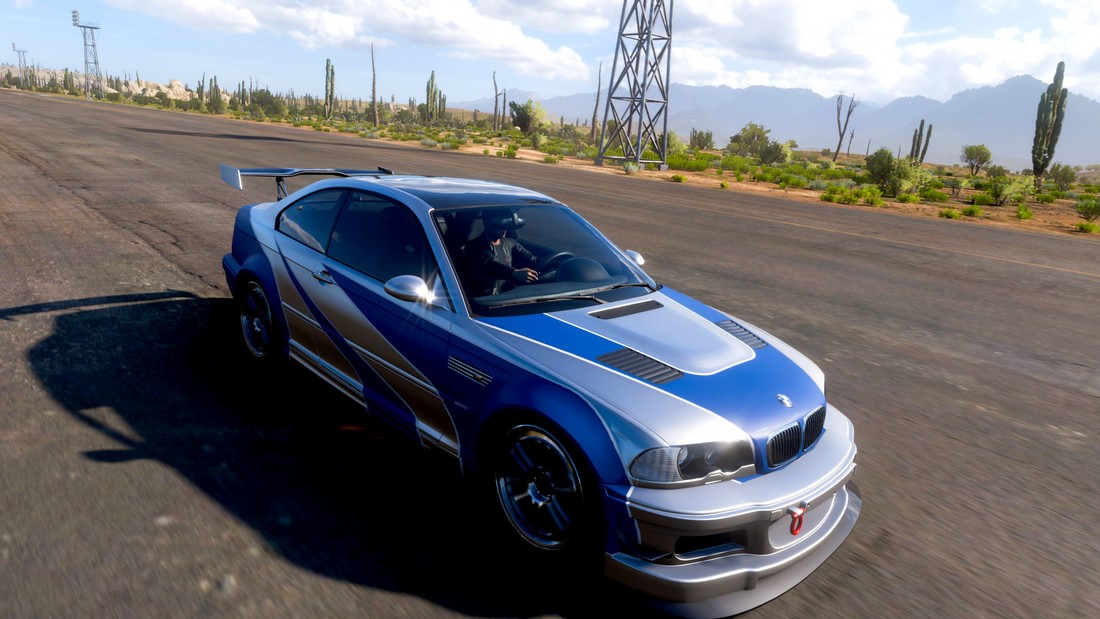 There are hundreds of different cars in Forza Horizon 5. And it’s very tempting to try every car out. At least it was for me.

But I also learned, after wasting hard-earned credits on a bunch of cars, that most cars are so much alike. They have pretty much the same handling and speeds.

So, I stopped buying cars. Then I spent some time picking a few decent cars for me to use regularly.

I picked a classic BMW M3 for the street races, Ford Bronco for off-road races, and McLaren Sienna for fast-paced races.

These are the only cars that I cycle between when playing Forza Horizon 5. I know it sounds boring, but this helped me to save enough credits to buy more useful things in the game, like player houses.

Just to reiterate my previous point, you should avoid buying cars from the Horizon festival.

For starters, it’s a waste of money. And, there are much cheaper ways to get cars.

In Forza Horizon 5, you can unlock free cars by completing achievements. As well as from Wheel Spins. And even get random gifts from other players.

But, more importantly, you can buy cars super cheap from the auction house too.

3. Use The Auction House 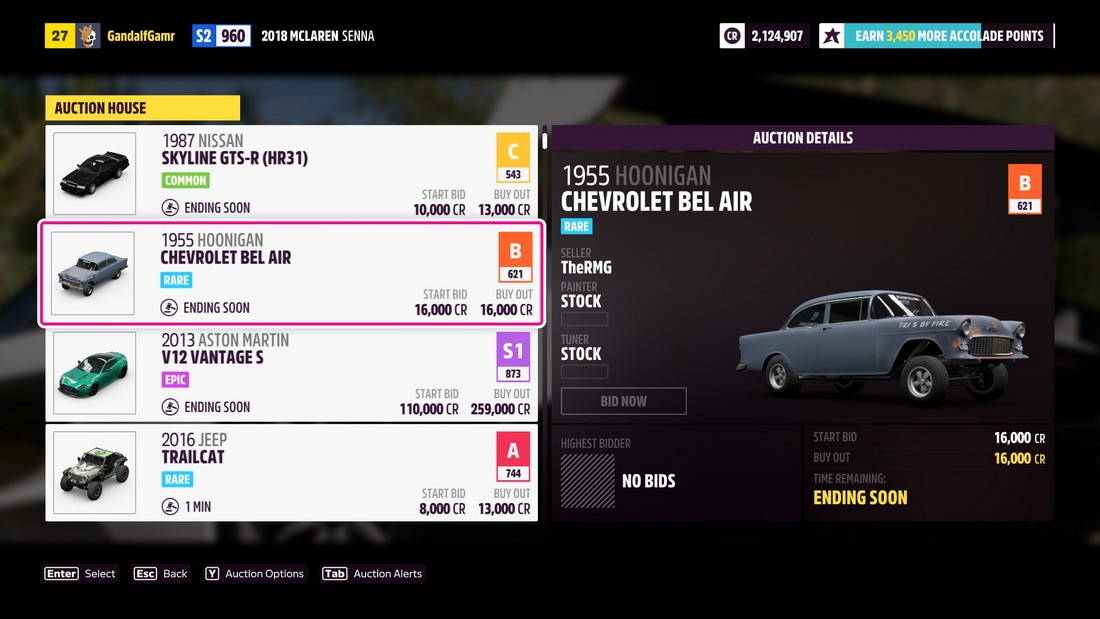 The auction house in Forza Horizon 5 is the best place to buy used cars from other players as well as to sell your own cars.

Some players use the auction house as a way to earn more credits (buy low, sell high). But, I never really liked that concept of playing the game.

Still, the auction house is a great place to find a good deal on a car that you dream of driving. They usually come tuned as well, this will save you some money that goes into upgrading your car.

There are two game modes in Forza Horizon 5. You can play races online against other players (PVP) or you can play solo against AI (PVE).

If you plan on playing against other players, you should study up on how to upgrade and tune your car. Because even the tiniest improvement plays a key role in winning and losing.

If you’re playing solo, you don’t have to worry too much about max upgrading your car. But still, you should upgrade some of the important parts of your car to easily beat the AI cars.

Forza Horizon 5 allows you to buy tuned setups made by other players. As well as auto-upgrade your car. Or you can pick and upgrade the parts you want.

5. Fastest Is Not Always Better

Normally, when playing a racing game, you usually go for the fastest car in the game because well it makes sense, right?

Well, not in Forza Horizon 5 (or in reality).

The fastest cars in Forza Horizon 5 are actually horrible at handling and cornering. You’ll have a terrible experience in the game if you try to race in X class or S2 class cars.

Instead, I prefer to play in A class or S1 class cars. They are decent at speed and have good handling as well.

If you’re having a tough time in the game, you should try going for a car in a lower class.

6. Improve Handling With This Upgrade 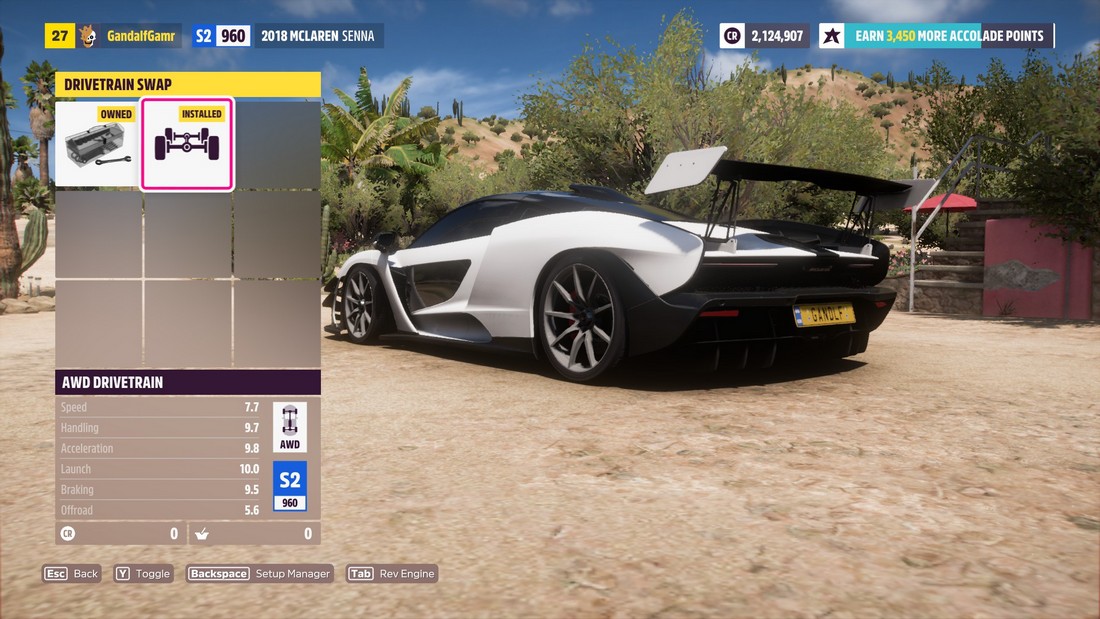 I had a terrible time playing Forza Horizon 5 at first because almost every car I played had bad handling.

Whenever I take a corner, I would lose control of the car and it would spin out.

Then I later found out that changing the car from Rear-Wheel-Drive to All-Wheel-Drive can drastically improve handling.

After further experiments, I also changed the tire to Rally tires and increased the width of the rear wheel to the max.

This really helped improve the traction and handling of the car. 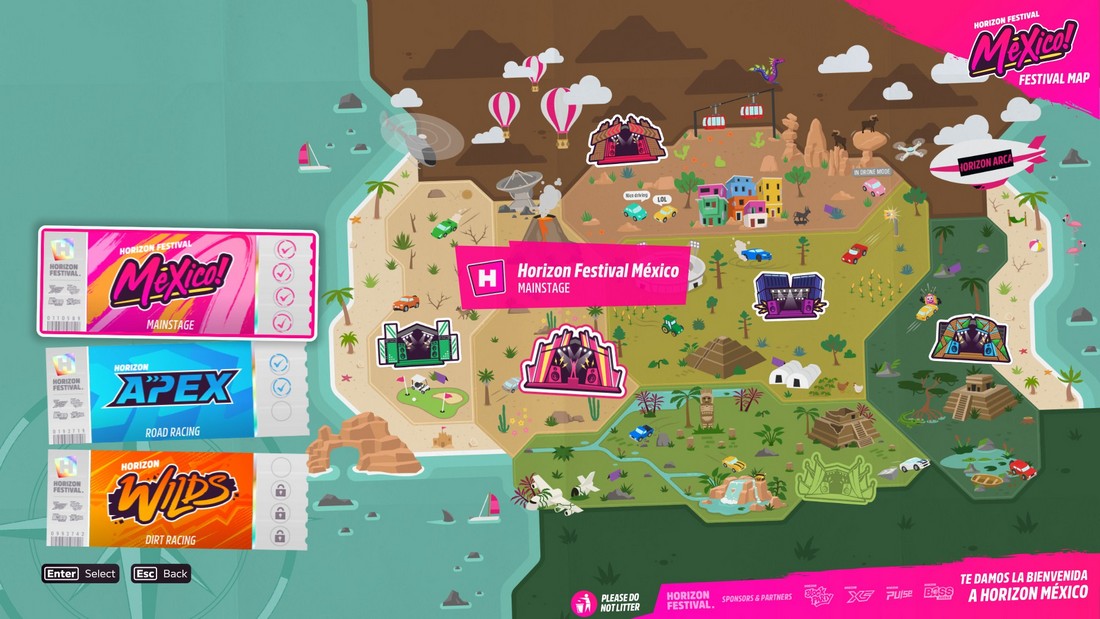 There a leveling system in Forza Horizon 5. This is tied to your personal account.

You can earn XP from various events, races, and activities. And when you earn XP, you can level up your character.

Accolades can be earned from specific activities and events. And you can only earn them once from an event. You can replay a race to earn more XP, but it won’t earn you more Accolades after the first time.

Just like leveling up your character, you can also level up your cars. You need skill points to do that.

With skill points, you can unlock specific perks for each car you own. This skill tree can be accessed from the Pause menu. On the Cars tab go to the Car Mastery section.

Skill points can be earned by pulling off stunts and doing wild things in the game. For example, drifting while you’re driving in the open world or destroying a bunch of stuff earns you skill points. 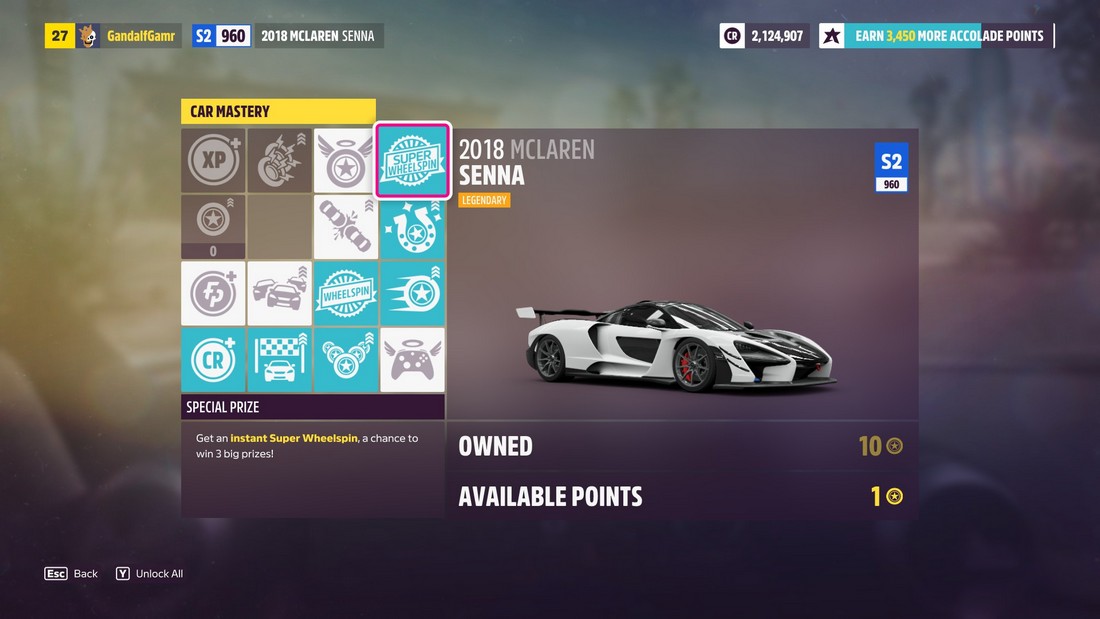 Unlocking perks in Car Mastery is another great way to earn wheel spins for free.

Some cars in the game have wheel spins and even Super Wheel Spins as perk points. So use your skill points to unlock them. 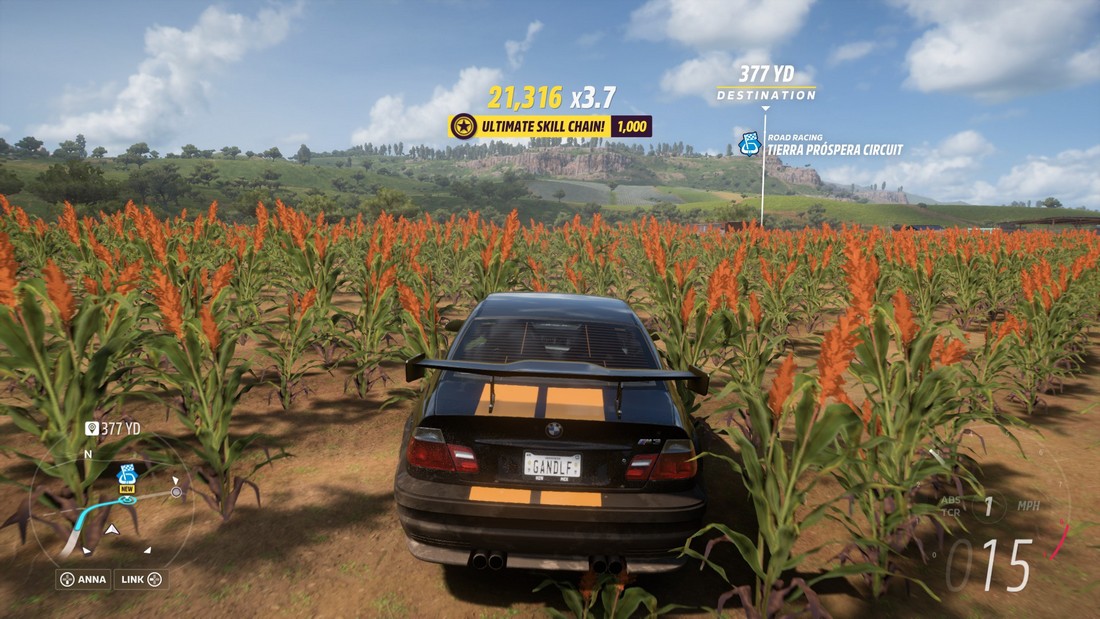 Another easy and fun way to earn skill points is to go off-road.

Whenever I’m going to an event far away on the map, I drive the car off-road, taking down the trees and all sorts of stuff along the way.

Usually, at the end of the road, I earn a couple of Skill points too.

Forza Horizon 5 is meant to be played on the road. It’s all about driving around in the open world.

But, sometimes it sucks when you have to drive all the way across the map for an event. This is where fast travel comes to help.

In the beginning, fast travel is not available in the game. To unlock fast travel, you need to buy the Buenas Vistas house.

Buenas Vistas house costs 2 million credits and you can only buy it after unlocking the Street Scene (Guanajuato expedition) in the game.

Once you buy the house, you can fast travel to any event or location on the map. So it’s definitely worth it.

12. Use the Drone for Barn Finds 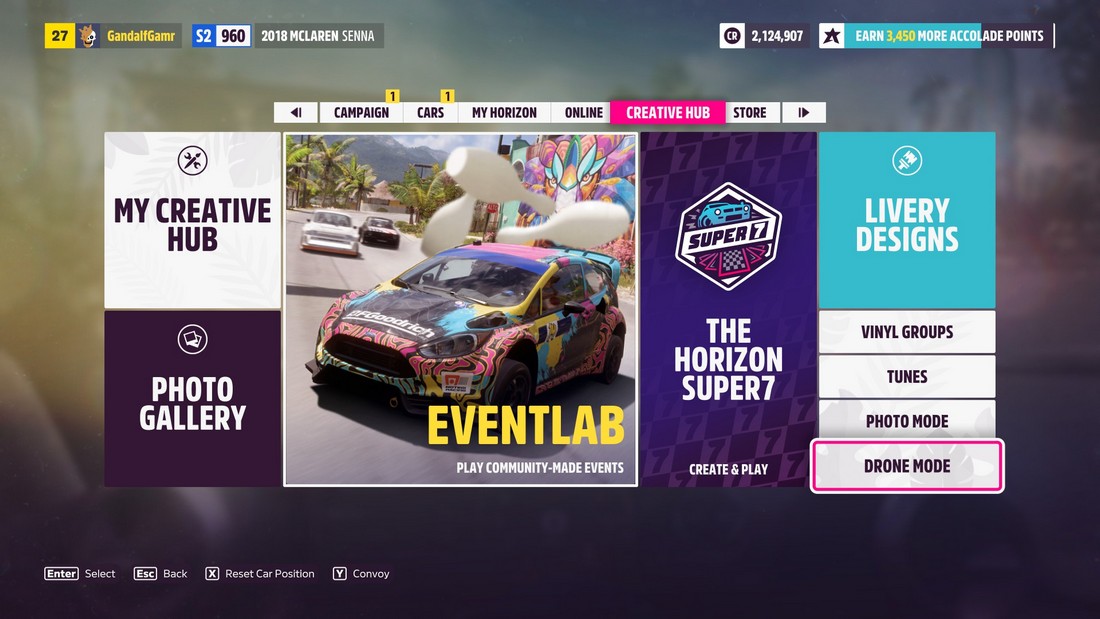 It took me a while to figure out where the Drone mode is located in Forza Horizon 5.

Unlike Forza Horizon 4, the drone mode is now hidden away in the Creative Hub of the pause menu.

The drone is a useful tool you can use during Barn Finds. As well as for taking quick screenshots.

You can send cars as gifts to other players in Forza Horizon 5.

If you have an extra car or two in your garage, be sure to gift it to someone.

I’ve sent many cars to other players even though I’m broke. And I noticed that whenever I send a gift, I tend to receive one back.

Not sure if it’s random or there’s an algorithm to it.

14. Be Patient and Enjoy The Ride

Overall, the best advice I can give you is not to rush it in Forza Horizon 5.

There are all kinds of skill point farming and credit farming guides out there that manipulate glitches and use hacks.

Don’t use any of those methods. Play the game as it’s meant to be played. It’s the best way to enjoy your time in the game.

Elite Dangerous features a 1:1 scale of our Milky Way galaxy. And that includes our ...
By GandalfTheGamer
7 hours ago