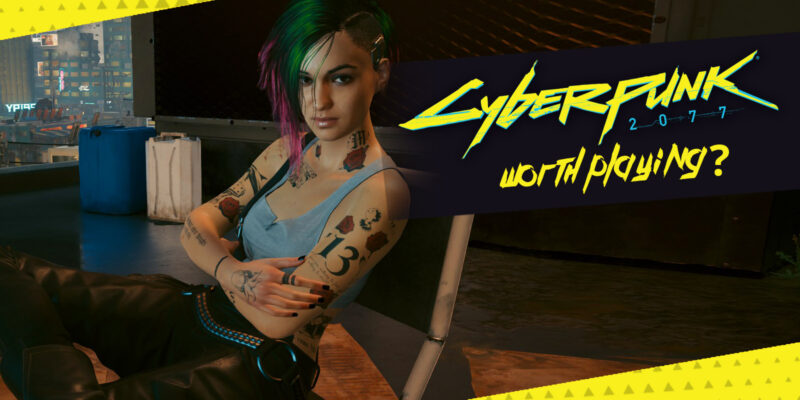 Cyberpunk 2077 was the most anticipated game of 2020 and its release was also one of the biggest disasters of the year.

The developers took the responsibility for their mistakes and vowed to fix the game. And they did exactly that by continuously releasing patches and updates to improve the game.

After many, many updates, the game finally got the attention it deserves in 2022. It became one of the top-selling games on Steam and the player counts went up to all-time highs.

But the question still remains, is Cyberpunk 2077 worth playing right now? The answer to that is Yes!

The game is in much better shape than it ever was and it’s the perfect time to play the game for the first time or jump back in for a second playthrough.

And that’s exactly what I did. I installed the game again and decided to do a second playthrough with a brand-new character.

Here’s what I found out about the state of the game. 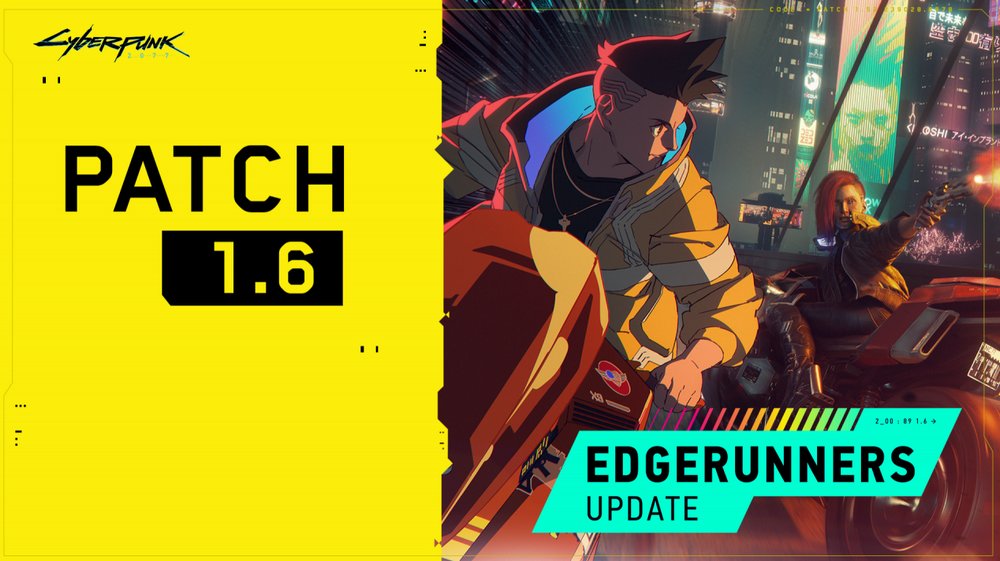 The Cyberpunk 2077 Edgerunners Update, or the patch 1.6 is the update that brought this game back from the grave.

This update was special for the game as it was released alongside the Netflix anime series of the same name.

The Netflix show was amazing and it’s the main reason why so many people started playing Cyberpunk 2077 again.

But to everyone’s delight, the game was also improved by a lot since its release.

Patch 1.6 was a massive 40GB update and it overhauled a lot of the game mechanics for good.

The game runs and feels amazing. And I’ve been playing it non-stop since the patch came out.

In addition to the improvements, this patch also added some new weapons and gear to the game as well. So if you’ve played the game before, there are tons of new stuff to explore in Cyberpunk.

World, Gameplay, And Everything Has Improved 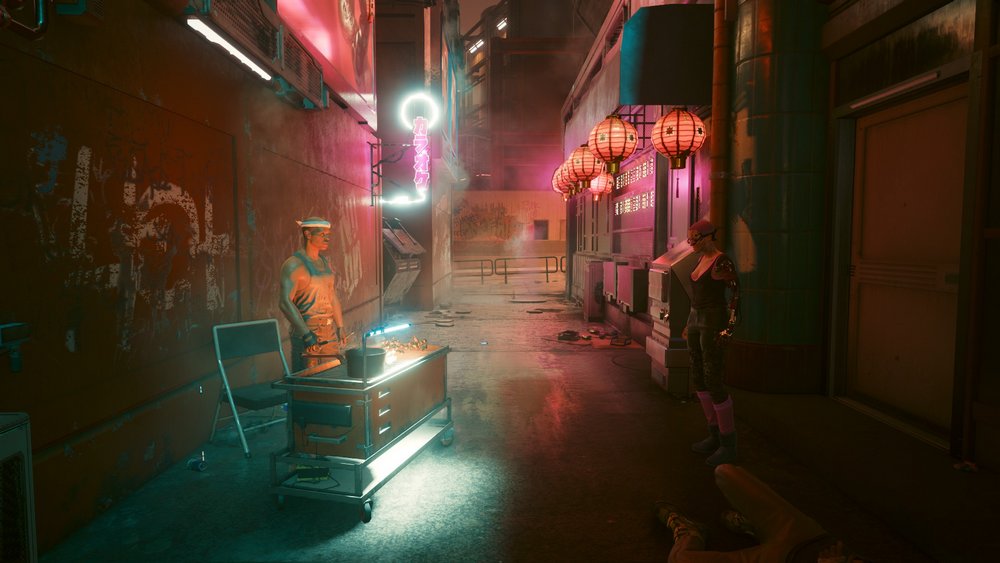 At launch, the open world of Cyberpunk 2077 felt dull and lifeless.

Sure, the Night City was populated with people and vehicles, but they were all just walking around doing nothing.

Even if you start shooting, they will just drop dead without reacting. Vehicles will just run you over. And cops will just stare at you when you make an offense.

All of these issues have been fixed in the latest patch. The Night City now feels more alive than ever. NPCs react better and even try to fight you at times.

You will also come across random events in the world like cops chasing after bad guys. Or people protesting in front of buildings.

All this makes it much more fun to explore the world again. 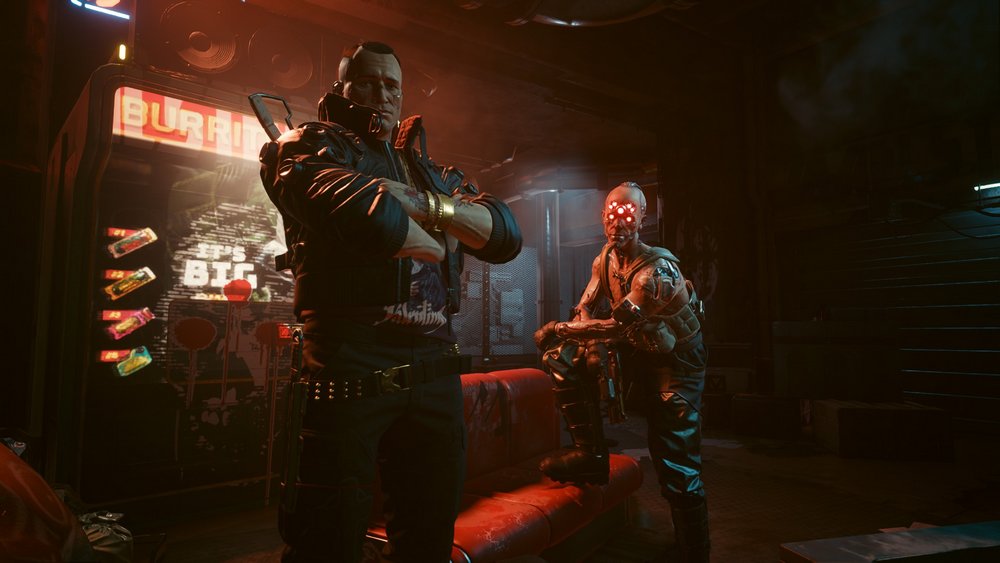 At launch, there were lots of glitches and memory leaks that made the game perform terribly on PC and even on consoles.

But all that have been fixed. Especially with DLSS enabled, the game runs great and looks incredible on PC.

This used to be a public opinion about the game until patch 1.6 came out. But since the update, the game came back from the dead and is on track to be one of the biggest games ever made. 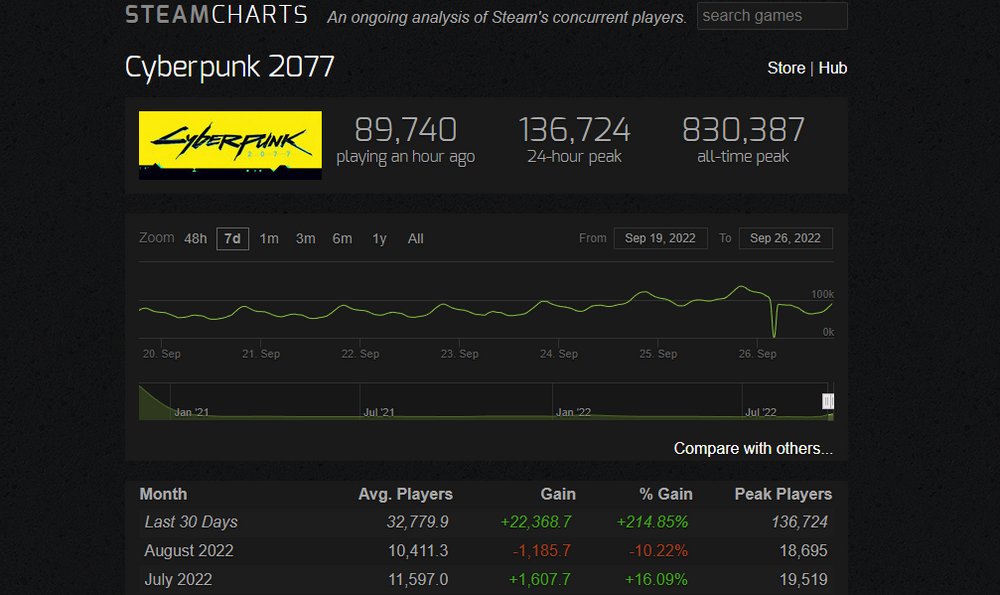 According to Steam Charts, the game only had around 10K players in August 2022. In September, the numbers went up to over 136K peak players and it keeps growing.

This is even higher than the Witcher 3 all-time peak of 103K concurrent players.

So no, Cyberpunk 2077 is not a dead game. It is very much alive and kicking.

Cyberpunk 2077: Phantom Liberty, the first expansion for the game was also officially announced for the game. It’s coming out in 2023.

Keanu Reeves is also returning to play the role of Johnny Silverhand and it will feature a brand new district in the Night City.

Cyberpunk 2077 is in perfect shape right now. In fact, it’s one of the best first-person shooters I’ve ever played. It has some wild guns and tons of possibilities to play different builds.

That alone makes the game worth playing. But Cyberpunk is much more than that. The bustling world of Night City feels incredible to explore during the nighttime. The neon lights and the streets just look amazing.

If you’re on PC, you can grab Cyberpunk super cheap for around $16 bucks from a key shop. And it’s totally worth the price.

Right now I can confidently say that Cyberpunk 2077 is one of the best games ever made!

10+ Most Relaxing Games You Can Play To De-Stress

Sims 4: Top 5 Best Careers & How To Get Started